The nature of the oil is a viscous liquid, usually with a characteristic odor lighter than water and usually insoluble in water. They oxidize very slowly, can last up to 50 years.

In addition, insoluble oils form a thin film around suspended solids, which can affect the ability of suspended solids to settle or float when forming unsettled aggregates.

Production wastewater containing oil and grease generated during the operation of the Western Petroleum Depot is collected along pipelines and trenches and then led to a centralized treatment station.

DAF flotation equipment is an oil treatment equipment imported completely and synchronously from abroad. The flotation device consists of 3 treatment tanks placed in series. Wastewater from the conditioning tank is pumped into the mixing tank, where the coagulant is added to the water, thanks to the operation of the high-speed agitator, the coagulant is mixed with the wastewater. Then the wastewater is flowed to the reaction tank, where the colloidal agent, PAA, is mixed with the wastewater by a low-speed agitator before flowing to the DAF flotation tank.

At the DAF flotation tank. Thanks to the operation of equipment including high pressure pump, air compressor and pressure vessel. Micro-bubbles are generated in the treatment tank. These air bubbles have an attractive force that adheres to the particulate matter in the wastewater, grease and oil and floats on the surface of the tank to form a layer of foam or scum floating on the surface of the tank. After that, the foam removal system will remove this layer of scum and lead to the pipeline to the waste oil tank. The sludge deposited in the flotation tank will be periodically discharged to the sludge drying yard by the operation of the solenoid valve. Clean water after the treatment tank is usually drawn from the end of the flotation tank, and is led along the pipe to the receiving source 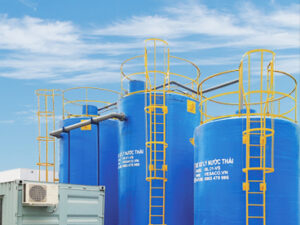 Biotechnology combined with mobile microbial media MBBR is a combination of two processes of circulating activated sludge and the ...

Wastewater treatment technology by MBR MBR technology: Aerobic technology combined with MBR membranes is one of the most advanced ...

Wastewater characteristics The nature of the waste source. Wastewater flowing into the treatment system comes from laundry operations ...